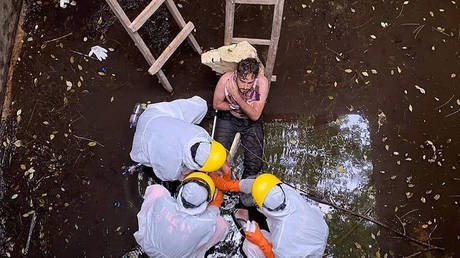 A 29-year-old British man, believed to have fallen into a disused concrete well on the Indonesian island of Bali while trying to escape from a dog, was lifted out by local rescuers after spending almost one week underground.

Jacob Roberts’ predicament began while he was running away from a dog which chased him through a small hamlet in Bali, as he later told rescuers. The dramatic chase ended when he stumbled into the empty four-meter well, breaking his leg.

The well was nearly empty but had a small amount of water, which apparently increased Roberts’ chances of surviving, it turns out.

Still, he had to spend six whole days in the underground trap, until his cries for help were heard by a villager, UK media reported. Indonesian rescue services immediately responded to the call, dispatching a team to extract the unlucky Briton from the well this Sunday.

Also on rt.com
Siberian man falls 9 stories head-first down VENT SHAFT & survives thanks to FELT BOOTS he dropped there earlier


Clad in white protective suits and respirators, the workers used ladders to reach Roberts, who looked “thin and injured,” as the local police chief told the Daily Mail.

The rescuers used ropes and a stretcher to extract him from the concrete pit, then rushed the man to a nearby hospital.

Bali, a world-renowned resort island of Indonesia, has been shut down due to the ongoing coronavirus outbreak. Local officials, however, hope to restart tourism in October ahead of the high season.

Walsh on Trump tweet: I don't give a damn if he's joking, he said it