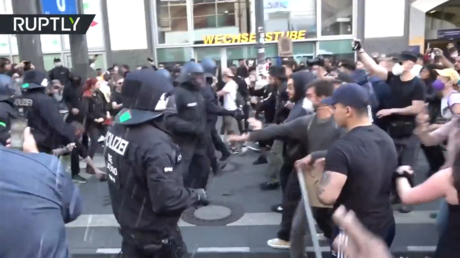 Clashes erupted in downtown Berlin, Germany at a rally in support of US protests, as demonstrators squared off with local law enforcement. Nearly 100 people have been arrested.

Some 15,000 flocked to Alexanderplatz, a square in the center of the German capital on Saturday afternoon to voice solidarity with Black Lives Matter protests that have spread across the US. While the main rally, which kicked off around 2 pm local time and lasted for two hours, wrapped up without incident and saw protesters playing jazz music and clapping, the subsequent gatherings around the same area were marred by violence.

About an hour after the peaceful rally ended, there was a showdown between officers and demonstrators, when “several hundred” anti-racism protesters swarmed the area around the Alexanderplatz railway station, according to police.

Scuffles broke out after officers moved to arrest a man suspected of vandalizing a police vehicle, the authorities said. Police said the officers were struck by several bottles and stones thrown from the crowd, which led to an officer and a freelance photographer on the scene being injured. A video by RT’s Ruptly video agency shows a group of about a dozen officers pinning a protester to the ground, and then being pelted by projectiles.

Also on rt.com
‘We all bleed the same color’: Thousands of demonstrators turn out for BLM protests across Germany (PHOTOS/VIDEOS)


A total of 93 people have been arrested as thousands took to the city’s streets to take part in some 14 rallies, planned for Saturday. Around 800 police were deployed to the city centre to ensure the rallies would not end in disturbances. However, 28 members of the law enforcement have been injured, including three who were temporarily relieved from duties after receiving treatment.