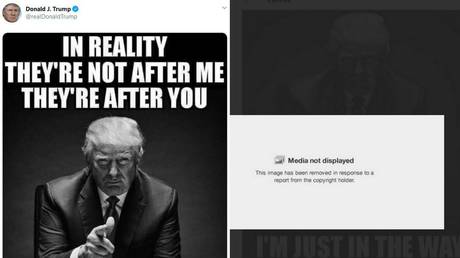 Twitter has taken down a post by US President Donald Trump, in which he used a photo of himself to make a meme. The tweet was yanked shortly after the Times, embroiled in a bitter feud with Trump, filed a copyright claim.

The tweet in question was posted by Trump on Tuesday and featured a photo of him along with words:”In reality they’re not after me, they’re after you. I’m just in the way.”

Trump is no stranger to using photos of himself to make a statement on his social media of choice (cue his Game of Thrones social media phase). This time, however, the US president apparently made a mistake, using a picture snapped by Times’ photographer Damon Winter.

It did not take long for the paper, which has recently escalated its attacks on the Republican leader, to spot Trump’s apparent blunder and file a copyright claim, Axios first reported on Wednesday.

Upon removing the post, Twitter confirmed that the company acted upon a copyright complaint from a rights holder. The Times, in turn, acknowledged that they urged the social media giant to take action.

The photo originally illustrated a story on Trump the NYT ran back in 2015.

It’s not the first time Twitter pulled one of Trump’s posts citing copyright violations. Last month, the platform removed a video sporting a mock CNN chyron shared by the president. The video, which saw one toddler running after another, was removed after the children’s parents filed copyright claims.

CNN, as well as the Times, have long been embroiled in a very public war with Trump, who has repeatedly labelled them ‘fake news,’ citing in particular the outlets’ regular claims of ‘Russian collusion’ at the height of the Russiagate saga, which has since fizzled out.


With the original Russiagate narrative debunked, the Times is now promoting a sources-based story which originally claimed that Trump was briefed on intelligence alleging that Russia paid bounties to Afgan militants to kill US troops. With US intelligence agencies and the White House denying that Trump ever received such a briefing, the story has shifted several times, and now claims that the intelligence had been included in one of Trump’s written briefs in February, and that the suspected recipients of the bounties were not the Taliban, but rather “criminals” who possibly had links to the militant group. Despite the Pentagon’s denial on Tuesday that it had so far unearthed “no corroborative evidence” to back up the story – as well as rebuttals from both the Taliban’s and Moscow – the Times has stuck to its reporting.

All classes below 8th grade to resume on Sept 28: Saeed Ghani

Rise in terror offenders being released