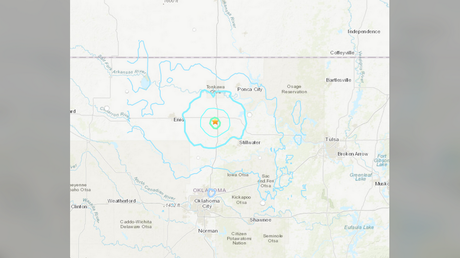 A 4.5-magnitude rattle has struck Oklahoma at a shallow depth of about 8 km, United States Geological Survey (USGS) reported. The tremor came shortly after US President Donald Trump rally finished in the state.

The USGS initially reported the seismic event as a 4.2-magnitude quake, but later upgraded it to 4.5.

USGS preliminary report of a 4.2 magnitude earthquake centered 5 miles northwest of Perry, OK. at 10:15 PM. The depth of was 7.9 km.#okquake#okwx

The quake struck 10:15 pm local time (03:15 UTC) some 10 kilometers (6.2 miles) northwest of Perry, which is located about 72 miles from Tulsa, a city that hosted a Make America Great Again rally on Saturday evening.

Local media report that tremors were felt in Tulsa as well. There have been no reports of damage or injuries from what is considered a minor shaking, however.

Seismic events of that scale are not unheard of in Oklahoma, as it has seen a spike in earthquakes since 2009. There is an ongoing debate whether the increase in quakes has been primarily due to fracking.

While some say that the technique which is used to extract gas and oil from deep undeground is the driving force behind the surge, others argue that it’s far from the only cause.

In other news, there was just a 4.2 earthquake about 70 miles from Tulsa. Oklahoma has had a surge of quakes the past decade due to fracking. Just a reminder that aside from his utter failure in response to covid and racial injustice, Trump has atrociously failed the environment.

The USGS says that only a small fraction of the quakes could be linked to the highly controversial process, stating that “the largest earthquake known to be induced by hydraulic fracturing in Oklahoma” in 2019 was just a 3.6-magnitude rattle.

While the Saturday evening’s quake has unlikely fazed Oklahomians, who experience similar events on more or less regular basis, the US President’s detractors on Twitter have seized the opportunity to employ their wits, jokingly suggesting that it was the mother nature’s response to the first MAGA rally in three months.

Not long after Air Force One left Oklahoma we experienced a 4.2 earthquake. Or collective shudder, depending on how you look at it.

Coronavirus: Easing of lockdown sparks rise in litter in Wales

Sheikh Rasheed says 3,000 unmanned railway crossings to be 'done away with this month'

“The track area will be completely fenced off. No one will even be able to move alongside the railway tracks,”

Brad Pitt wanted to work in a Bollywood with Aishwarya Rai